Big building firms face a multi-billion-pound levy to help families pay to repair homes with dangerous cladding in the wake of the Grenfell fire.

It could a mean a levy on all high rise flats and possibly a separate charge on major developments to atone for building tens of thousands of flats and homes with unsafe cladding and insulation in recent decades.

It is part of a package of measures being discussed by Chancellor Rishi Sunak and Housing Secretary Robert Jenrick to meet Britain’s estimated £15billion post-Grenfell repair bill. The levy could raise up to £200million a year – a total of £2billion over ten years.

The inquiry into the 2017 Grenfell fire in Kensington, west London, in which 72 people died, has exposed how hundreds of apartment blocks were built which do not comply with safety regulations.

The Government has said developers and building owners should fix the safety crisis, but leasehold law means residents in the flats must foot the bill.

Ministers are considering two annual levies to ease the financial burden on leaseholders:

It would meet demands by campaigners, backed by the Daily Mail, to stop big developers shirking their responsibility.

Maxine Burton: This could cost me my job as a solicitor

Maxine Burton is facing bankruptcy – and losing her job as a solicitor – after a flat she bought three years ago became worthless overnight.

The couple planned to add value to the property with renovations and sell it on after a year in order to buy a larger place. 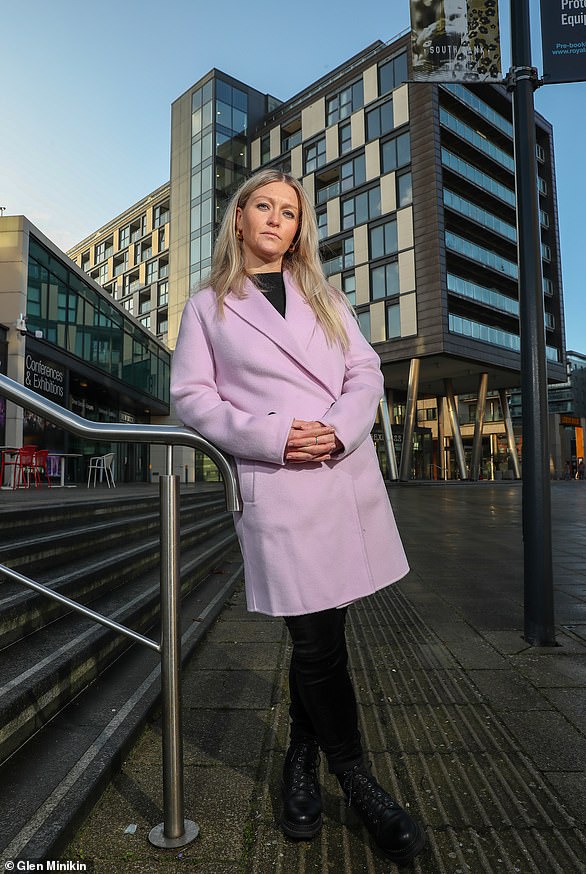 But a safety survey carried out in November 2019 identified several risks in Cartier House, Leeds, a nine-storey building, including cladding issues, an absence of fire breaks within the walls and wooden balconies. Now Miss Burton’s life is on hold. She also said she faces ‘financial ruin’ with remediation costs expected to reach £43,000.

She said: ‘It’s so hard not being able to have plans for the future and the financial stress is crippling.

‘I don’t want to spend all of my thirties living in this situation. We wanted to move last year and start a family but that doesn’t look like it will happen now.

‘We were not aware when we bought the flat that there were issues. We, like everyone else, bought in good faith that the building was safe. But the corruption evident in the building system and the carelessness is shocking.’

Miss Burton fears she will lose her job if she goes bankrupt, because her right to practise would be suspended.

She added: ‘The Government keep making statements but won’t pursue anything for us.

‘The constant fear of death is also really hard to live with. We’re right at the top of the block at the end of a corridor, so if there was a fire it would be very difficult for us to get out safely.’

Significantly, the proposal is advocated by fire and building safety minister Lord Greenhalgh, who is also responsible for the Grenfell inquiry.

Lord Greenhalgh, a close personal and political ally of Boris Johnson and who served as his deputy when he was London mayor, said: ‘A generation of people have built buildings that are not fit for purpose. In recent years developers have made profits of between 20 per cent and 30 per cent.

‘Of course they should step in and do the right thing. The solution will include a levy on the development community.’

He said paying a levy would help developers regain the public trust needed to carry on in business.

A Government source added: ‘A levy is in keeping with ‘the polluter pays’ principle. We may not be able to hold the industry legally responsible, but we can hold it morally responsible and make it contribute to putting things right.’

Charlotte Woods: I was loyal to Tories. Now I feel betrayed.

Charlotte Woods, a former campaign manager for the Conservative Party, always viewed owning a home as her ‘number one goal’.

She saved up her earnings while working for several candidates later elected to Red Wall former Labour seats in the North in 2019.

But Miss Woods says the Government’s stance on flammable cladding has left her feeling ‘very betrayed’. 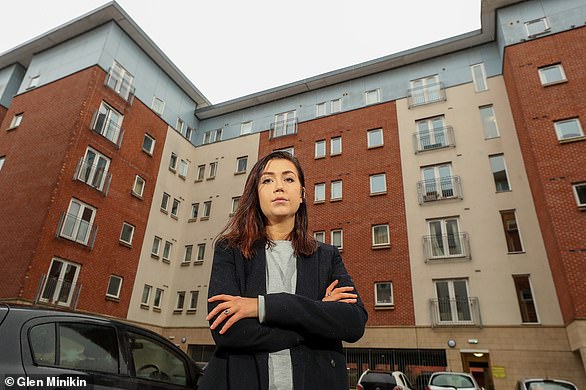 Because her six-storey block is less than 18m high, its residents do not qualify for a share of government grants.

Miss Woods, 27, who bought her two-bed flat in Salford, Greater Manchester, for £155,000 four years ago, is likely to face a bill of thousands of pounds to make the building safe. She and her partner lost the chance to sell and move to a family home in August and fear they may have to delay their wedding, planned for next year.

Miss Woods, who now works in communications, said: ‘We have a small section of rainscreen cladding on the top of our building. We’ve been told it’s flammable, the insulation under it is flammable and the fire breaks need replacing.’

Miss Wood said she felt ‘so proud’ to own a home at 23, but added: ‘I now feel very betrayed that the party I was once so loyal to has let me down so badly. I joined because I had conservative values, like the importance of owning your own home.’

Ministers have dismissed London mayor Sadiq Khan’s call for a massive one-off ‘windfall tax’ on developers as impractical, mainly on the grounds that it would put some building firms out of business.

The say an annual levy would raise far more in the long run without damaging the industry.

It is expected to be part of a wider package including a Government loan, and additional taxpayer support, to end the fire risk in millions of homes.

Making building owners and developers pay to fix the safety crisis has been a mantra of ministers ever since Grenfell. But the Government has shown little willingness to force the companies to pay, until now. Some developers have put money towards repairs, but nothing close to the amount needed to save some leaseholders from potential bankruptcy.

As the Mail has revealed, the biggest housebuilders have made more than £15billion in profit since Grenfell, allowing them to pay shareholders dividends of £5billion.

Since 2008, they have also benefited from billions of pounds of public subsidy via Help to Buy and Shared Ownership schemes.

But hundreds of apartment blocks have been built that do not comply with new fire regulations.

Britain’s most profitable housebuilder, Persimmon, commissioned an independent review which found in 2019 that it had a ‘systemic nationwide problem’ with fire stops in its timber-frame properties. Responding at the time, the developer said it would now ‘prioritise the customer over the pure profit motive’.

A separate investigation by the BBC in 2019 found that new-build homes constructed by Persimmon and Bellway Homes were sold with missing or defective fire breaks, which are designed to stop the spread of a blaze. The companies said they were addressing the issue.

By Matt Oliver for The Daily Mail

In a worrying sign for the wider housing market, the number of flats sold in September, a usually busy month, fell by 48 per cent year-on-year to about 5,900.

It means transactions worth a total of £1.6billion were lost, according to Land Registry figures.

The massive drop – which outpaced a 26 per cent drop in house transactions – has implications for the wider housing market because collapsing flat sales can affect other deals further up the property ladder. 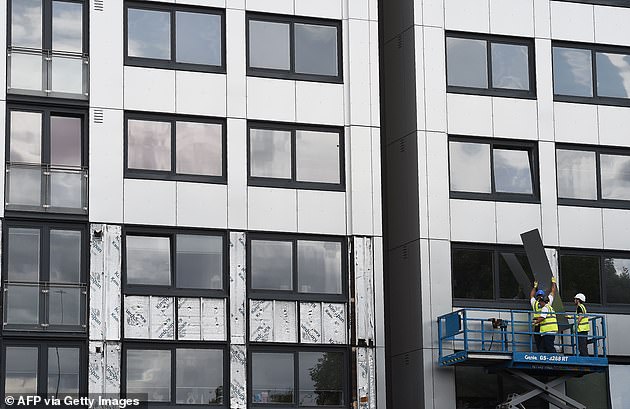 Campaigners claim fears about unsafe apartments are behind the decline. Following the Grenfell Tower fire in 2017, hundreds of thousands of homeowners have been forced to remain in flats they cannot sell because their blocks have similar, potentially unsafe cladding.

The concerns have prompted some lenders to refuse mortgages on the properties, while leaseholders have been left to foot the bill for repairs.

Miles Shipside, from Rightmove, said the drop would leave the market ‘seriously undermined’ because ‘sellers of flats typically prop up the rest of the home-buying chain’. 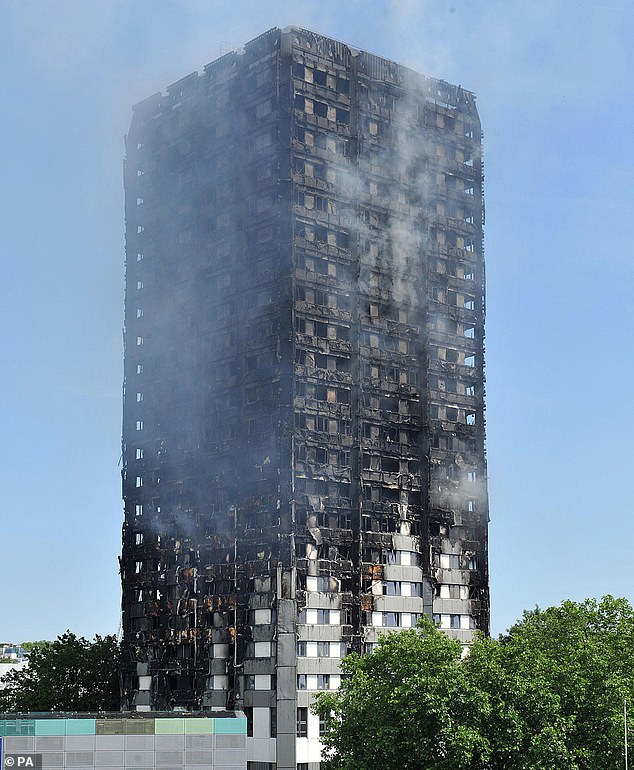 Following the Grenfell Tower fire in 2017, hundreds of thousands of homeowners have been forced to remain in flats they cannot sell because their blocks have similar, potentially unsafe cladding

Tom Marshall, 31, and his fiancee Jessie Andrews, 27, saw the sale of their £245,000 flat collapse in September after the buyer’s lender refused a mortgage on the property.

The flat was part of a four-storey block in Sidcup, south-east London, that failed an ‘external wall system’ safety check. It meant that former soldier Mr Marshall and his partner had to pull out of their planned purchase of a three-bedroom Victorian terrace.

‘We were buying off a lady who lost her work contract over Covid-19,’ he told the newspaper.

‘She was also trying to free up capital to support her son and his family to buy their first house.’