By Tom Pyman For Mailonline

Germany‘s right-wing opposition party could be placed under surveillance for threatening the country’s political system and violating the constitution.

The Alternative for Germany (AfD) has been the subject of a two-year investigation over fears it has become more radical.

The Federal Office for the Protection of the Constitution – a body inspired by Allied forces who helped write a new German constitution after the Second World War – has identified cases of party politicians denigrating Muslim migrants to the country and trivialising its Nazi past, NPR reports.

‘They were dehumanized in the speeches. They were compared to animals. The [agency] report made it quite clear that these people had crossed a line.’

Other concerns raised included comments made by Bjorn Höcke, a far-right group in the party known as ‘Der Fluegel’ (The Wing), in 2017 in which he called the Holocaust Memorial in Berlin a ‘monument of shame’ at an AfD event.

Reports now suggest that the entire party – which includes several dozen lawmakers in parliament – will be monitored by the state.

However, some figures have slammed it as a political move, as the agency is run by Chancellor Angela Merkel’s government, with members of her own Christian Democratic Union party on the payroll.

Party politicians claims the CDU is concerned by the rise of the AfD, with it now having 88 of the Bundestag’s 709 members – a representation of more than 12%.

It comes after the same agency placed a regional branch of the AfD under surveillance last summer, denting the nationalist party’s efforts to establish itself as a credible opposition force.

The move followed the AfD’s expulsion of Andreas Kalbitz, party chief in the eastern state of Brandenburg, over links with far-right groups, though the national executive committee’s decision was still long disputed by rank-and-file members after that.

Brandenburg Interior Minister Michael Stuebgen said in June: ‘The Brandenburg AfD has become more and more radical since its foundation and is now dominated by endeavours that are clearly directed against our free democratic fundamental order.’

He said parts of the state branch were dominated by the ideas of The Wing. 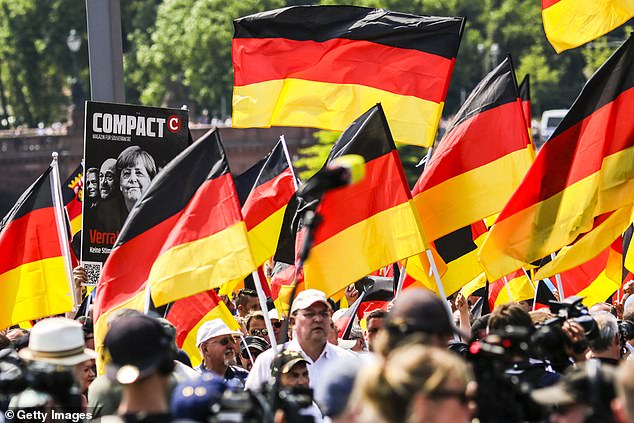 Participants attend the right-wing AfD demonstration titled ‘Future Germany’ on May 27, 2018 in Berlin

Meanwhile, the coronavirus death toll in Germany has passed 50,000, a number that has risen swiftly over recent weeks even as infection figures are finally declining.

The country’s disease control center, the Robert Koch Institute, said tonight that another 859 deaths were reported over the past 24 hours, taking the total so far to 50,642.

Germany had a comparatively small number of deaths in the pandemic’s first phase and was able to lift many restrictions quickly.

But it has seen much higher levels of infections in the autumn and winter.

Hundreds of deaths, sometimes more than 1,000, have been reported daily in the country of 83 million people over recent weeks.

Alabama girl, 7, sells lemonade at her mom’s bakery to pay for her own brain surgeries

NSW state Premier hints gyms could be open soon with an announcement due ‘in...

Alabama girl, 7, sells lemonade at her mom’s bakery to pay...

Newborn girl is found abandoned on the street after the mother...